SIGNS OF A POSSESIVE LOVER 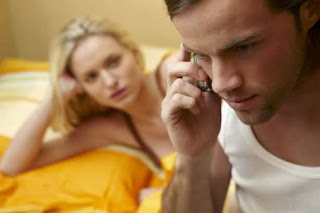 There’s a thin line between possessiveness and love. In the beginning it seems really cute, you feel special as if you have someone who can’t live a moment without you, as if you’re the only girl in his life… So how can you tell if he’s being loving or controlling?

1. NO SPACE:
One of the first signs of possessiveness is that it curbs your freedom. You will have no space whatsoever, for yourself. Everything will be subjective to your boyfriend’s approval. Everyone has a little bit of insecurities and fears in their hearts. But, giving them a right to dictate your life is not a wise thing to do. If your boyfriend is intruding your personal space because of his insecurities or fears, then it is a clear sign of a possessive boyfriend.

2. HE ACCESSES YOUR SOCIAL NETWORKING ACCOUNTS:
It’s normal for two people in a relationship to access each other’s social website accounts. However, possessive boyfriends go one step ahead and they start ruling your cyber life. I know of a girl whose boyfriend instructed her not to use social network at all, he went as far as adding and deleting people from her account. He calls it love I call it freaky!

3. HE FEELS JEALOUS OF YOUR MALE FRIENDS:
We all have a mixture of male and female friends but a possessive boyfriend will look at the guys as competitors and feel jealous of them. He can go to any extent to ensure that you don’t spend time with them even if you have female friends with you.

4. HE ASKS A LOT OF QUESTIONS:
Possessive boyfriends are often interrogative, very interrogative. He will ask you questions about your whereabouts, your male friends and the people you go out with. Interrogation is his way of making sure you don’t hang out with guys or other people he doesn’t like. He suspects everything you tell him and asks the same questions numerous times to validate the truth.

5.HE IS OBSESSIVE ABOUT STAYING IN TOUCH WITH YOU:
Some boyfriends stay in touch with their girlfriends because they genuinely want to stay in touch whereas others want constant information about every relevant and irrelevant detail in their girlfriend’s life. A possessive boyfriend will get annoyed and even mad at you if he can’t reach you, if your phone’s turned off or if you don’t reply to his texts.

6.HE DOUBLE CHECKS EVERYTHING YOU SAY:
Possessive guys aren’t the kind to believe you easily. They will doubt everything you tell them. Your guy is possessive (and not in a good way) if he double checks everything you tell him. For example, if you tell him that you are going over to your parent’s house, he will call your parents instead of you to make sure you’ve reached and tell you that your phone was switched off even though you know it wasn’t. Or, he might go to the extent of spying on you to make sure you don’t hang around with any guys.

7.HE IS INSECURE ABOUT YOUR POPULARITY:
Possessive guys are basically insecure about themselves on a certain level. They feel threatened at every step. If your guy is possessive, he might feel jealous or insecure about your popularity and he might even try to make you unpopular to boost his self esteem.

8.HE CHECKS YOUR PHONE DAILY:
Another common trait observed amongst possessive guys is their constant desire to check your phone to make sure you don’t message guys or say something negative about him to your friends. A possessive boyfriend might even accuse you of cheating on him whenever he sees you with a guy!

So is it really love?

Did you find apk for android? You can find new Free Android Games and apps.
Share:

HE'S OBVOIUSLY FLIRTING WITH YOU.